Irrigation Service charge is normally levied on the farmers for utilization of irrigation water. The charge will be realized by the Irrigation Department  through Beneficiary Committees of the Irrigation Schemes.. The amounts so collected are deposited to the State Treasury..

As per national policy, Irrigation Service Charges or water rates, as the case may be, should be realized from the beneficiary farmers so as to cover at least the full operation and maintenance cost of the irrigation schemes and the same should be reviewed and enhanced from time to time to cover about one per cent of the capital cost. The Irrigation Department levied Irrigation Service Charges in 1992 and the rates were doubled with effect from 2000 for enhancing revenue in conformity with the Fiscal Reforms Programme.

The Irrigation Service Charges are to be paid just after completion of the crop season to which the charges relate.

Forms to be filled

There are no forms to be filled. However, a Register for supplying water to crop field is maintained  by the Irrigation Officer in every Section.

Irrigation Officer i.e. the Assistant Executive Engineer of the locality / site / or the person in-charge of the Service. 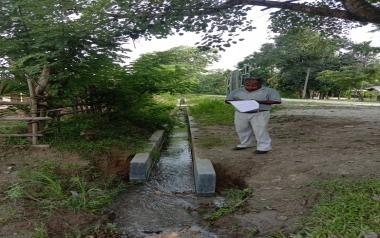